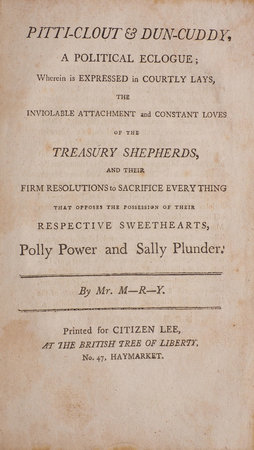 [MERRY?] ~ Pitti-Clout & Dun-Cuddy, a political Eclogue; wherein is expressed in courtly Lays, the inviolable Attachment and constant Loves of the Treasury Shepherds, and their firm Resolutions to sacrifice Everything that opposes the Possession of their respective Sweethearts, Polly Power and Sally Plunder. By Mr. M–r–y. [London:] Printed for Citizen Lee, at the British Tree of Liberty, No. 47, Haymarket. [ 1795.]

First edition, scarce. ‘A satire in verse, on William Pitt and Henry Dundas, Viscount Melville’ (ESTC). The publisher, ‘Citizen’ Lee, has been described as ‘the purveyor of the most flagrantly seditious literature in London’ (Mee, p. 157). A list of his books is given on the title verso here. By the end of 1795, Lee had spent a short spell in prison, before making good his escape and fleeing to Philadelphia, where he became the editor of the radical American Universal Magazine. Not in Jackson. Jon Mee, ‘The strange career of Richard “Citizen” Lee: poetry, popular radicalism and enthusiasm in the 1790s’, Radicalism in British Literary Culture, 1650–1830 (2002), pp. 151–166.