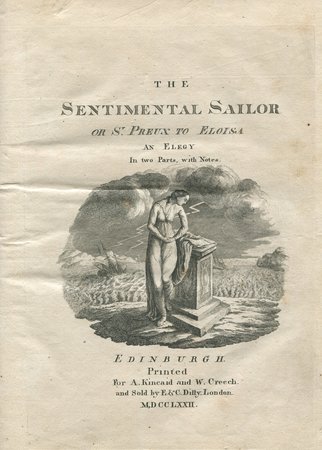 [MERCER, Thomas]. ~ The Sentimental Sailor or St. Preux to Eloisa an Elegy in two Parts, with Notes. Edinburgh. Printed for A. Kincaid and W. Creech. and sold by E. & C. Dilly, London. 1772.

4to (242 × 191 mm) in half-sheets, pp. xv, [1], 48; complete with the half-title; engraved title, mounted in the gutter to the following leaf, reinforced on verso where the leaf appears to have be cut; disbound.

First edition, scarce, dedicated to Jean-Jacques Rousseau by its Scottish author. Captain Cook had returned from his circumnavigation in 1771 to widespread acclaim, and Mercer’s poem reflects this, though he chooses Anson’s round-the-world voyage as the vehicle for his protagonist, St Preux.