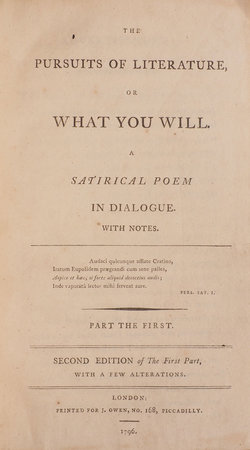 [MATHIAS, Thomas James]. ~ The Pursuits of Literature, or What you will. A satirical Poem in Dialogue. With Notes... Part the first. Second Edition of the First Part, with a few Alternations. London: Printed for J. Owen... 1796.

Pursuits of Literature: Second of the first part (first 1794, in quarto), first editions of the other three. Scarce, and even more so complete. ‘A wide-ranging satire with extensive notes on the conceit and licence of contemporary authors... The attacks on Payne Knight’s Worship of Priapus and Lewis’s The Monk are concerned with obscenity, and Mathias ridicules the “Black-Letter Kennell” of antiquarians (especially George Steevens), W. H. Ireland, Parr, Darwin, and Gilpin, on literary grounds. There is praise for Gray, Mason, Beattie, Burns, Cowper, Ann Radcliffe, Capell, Johnson, Isaac Reed, and Jacob Bryant, as well as for several of Mathias’s own works. But the poem is confessedly of its political moment, declaring openly that literature is an important tool of government. Held up for censure are Sheridan, Fox, Priestley, Paine, Horne Tooke, and Godwin... The British Critic approved of the poem as a “strenuous enemy and assailant of democratical principles, and of that monster, French, or Frenchified philosophy”... William Cobbett wrote to the anonymous author that “Your matchless poem... is become very fashionable in the libraries of the Americans”’ (Oxford DNB). Jackson, pp. 194, 213, and 221.