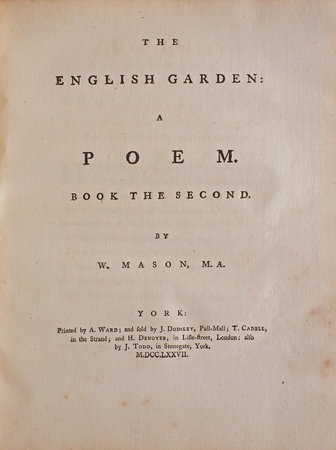 Second edition of the first part, first editions of the other three. A rare collection, Mason’s ‘magnum opus, The English Garden (4 books, 1772–81), over 2400 lines of blank verse based on Virgil’s Georgics, a didactic poem concerning landscape, art, and gardening’ (Oxford DNB). The intersection of these three arts were a defining feature of late eighteenth-century aesthetics, Horace Walpole writing in 1773: ‘Poetry, Painting and Gardening, or the science of Landscape, will forever by men of Taste be deemed Three Sisters, or the “Three New Graces” who dress and adorn Nature’. Jackson, pp. 13, 53, 71, and 86; Gaskell 20, 24, and 26.