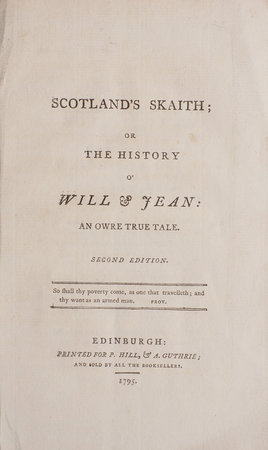 [MACNEILL, Hector]. ~ Scotland’s Skaith; or the History of Will & Jean: an owre true Tale. Second Edition... Edinburgh: Printed for P. Hill, & A. Guthrie; and sold by all the Booksellers. 1795.

Second edition, published the same year as the first, of Macneill’s well-known ballad against drink (skaith = scathe), which established his reputation. ‘It went through fourteen editions in twelve months, and its sequel the following year, The Waes o’ War, was almost as popular’ (Oxford DNB). Jackson, p. 204. All the early editions are scarce. For this one, ESTC lists 5 locations: Aberdeen, BL, NLS (3 copies), Guelph, Texas.