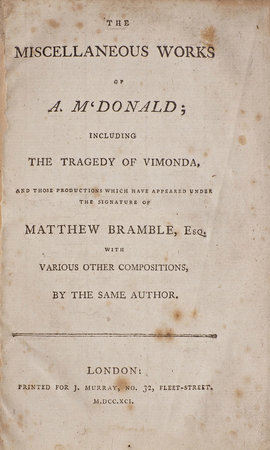 MACDONALD. M’DONALD, Andrew. ~ The miscellaneous Works... including The Tragedy of Vimonda, and those Productions which have appeared under the Signature of Matthew Bramble, Esq. With various other Compositions, by the same Author. London: Printed for J. Murray... 1791.

First collected edition, published the year after M’Donald’s untimely death (he was only 33), and styled by the English Review as a ‘very humorous, pathetic, and interesting miscellany’. Although M’Donald’s Vimonda had been performed in both Edinburgh and London to much acclaim, it was a failure in print: the text here comprises the reissued sheets of the 1788 edition.