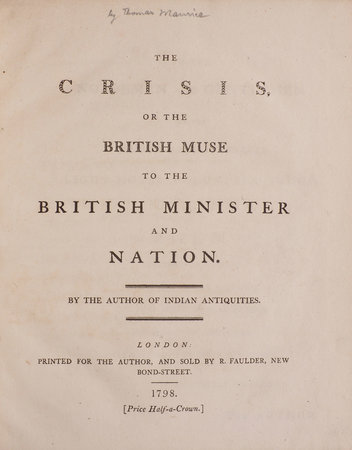 [MAURICE, Thomas]. ~ The Crisis, or the British Muse to the British Minister and Nation. By the Author of Indian Antiquities. London: Printed for the Author, and sold by R. Faulder... 1798.

First edition, privately printed, a poetical protest against the Directoire government in France ‘marked by more atrocious outrages against society than ever disgraced the most sanguinary tyrant of Asia, under the specious pretence of diffusing the principles of Liberty among mankind...’ A portent of the gathering storm between Britain and France, the Monthly Mirror called it ‘A lofty eulogium upon Mr. Pitt’. Jackson p. 224.