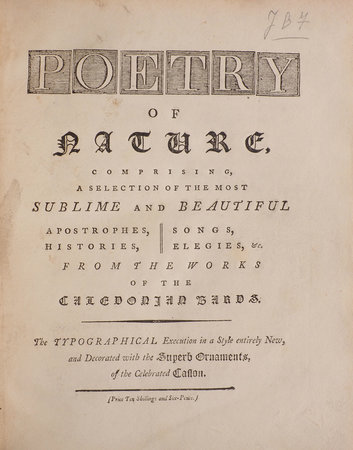 [MACPHERSON, James, and others]. ~ Poetry of Nature, comprising, a Selection of the most sublime and beautiful Apostrophes, Histories, Songs, Elegies, &c. from the Works of the Caledonian Bards. The typographical Execution in a Style entirely new, and decorated with the superb Ornaments, of the celebrated Caslon. [Colophon: Londini: Typis J.P. Cooke], [ 1789].

First edition of this Ossianic collection, published in Macpherson’s lifetime. It is one of the earliest (if not the earliest) book to employ William Caslon’s double pica script type, which was first introduced in his specimen book of 1785. The ‘Preliminary Address’ (dated 26 January 1789) calls attention to this new ‘species of Typographical Elegance’. A typographically daring production, the script type is used in conjunction with several other unusual types including a revived black letter, used in upper case.

The editor can be identified as Mary Potter from reference to ‘the posthumous publications of the late Mr. [T.] Potter her Father’, author of The Moralist, or Portraits of the human Mind exhibited in a series of Novelettes (1785). The subscribers include Warren Hastings, George Romney, General Paoli and Mrs Piozzi. Not in Jackson. ESTC lists four issues, none corresponding precisely with this copy, with (apparently) 4, 10 or 12 pages of subscribers, with viii or x numbered pages of preliminaries, and with or without a colophon. Birrell & Garnett, Catalogue of Typefounders’ Speciments [and] Books printed in Founts of Historic Importance (1928), 177.