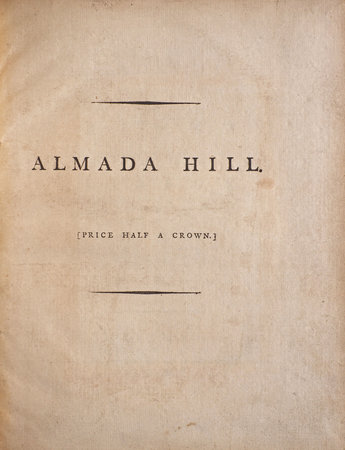 MICKLE, William Julius. ~ Almada Hill: an Epistle from Lisbon. Oxford: Printed by W. Jackson: And sold by J. Bew... London; and by the Booksellers of Oxford and Cambridge, 1781.

First edition. Dumfrieshire-born Mickle had moved to London in 1763 with the express intention of becoming an author. His career was mixed and he spent several years as corrector of the Clarendon Press, Oxford. His Lusiad (1776) a translation of the renaissance epic by the Portugues Luís de Camões brought him some success but his income was precarious. In 1779 he found service as secretary aboard HMS Romney and purser of the Brilliant. Travelling to Portugal, he was elected to the Academia Real at Lisbon, where he also composed Almada Hill, ‘a fresh and interesting poem’ (DNB) and an intriguing European variant of the ‘hill poem.’ Aubin, p. 302; Jackson, p. 85.