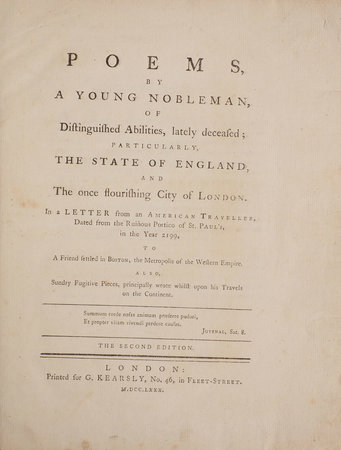 [LYTTELTON, Thomas, Second Baron]. ~ Poems, by a young Nobleman, of distinguished Abilities, lately deceased; particularly, the State of England, and the once flourishing City of London. In a Letter from an American Traveller, dated from the ruinous Portico of St. Paul’s, in the year 2199, to a Friend settled in Boston, the Metropolis of the Western Empire. Also, sundry Fugitive Pieces, principally wrote whilst upon his Travels on the Continent... The second edition. London: G. Kearsly, 1780.

This second edition printed in the same year as the first, the poem usually attributed to the gambling, drinking and drug taking ‘bad lord’ Lyttelton. ‘The dissolute son of a pious father, Lyttelton attracted fascinated, and horrified, attention in life and death... Lyttelton is credited with two works, neither proven with certainty. Poems by a Young Nobleman Lately Deceased appeared in 1780, and in a second edition the author was identified as Lyttelton. The Monthly Review thought the poems “poor, contemptible, and vulgar”... and the Gentleman's Magazine regretted that they had ever been printed (Oxford DNB).

‘This poetical prophet, appears to have anticipated Macaulay in his prediction concerning the downfall and desolation of London, the modern Babylon...’ (Sabin). Jackson, p. 81; Sabin, 42894.