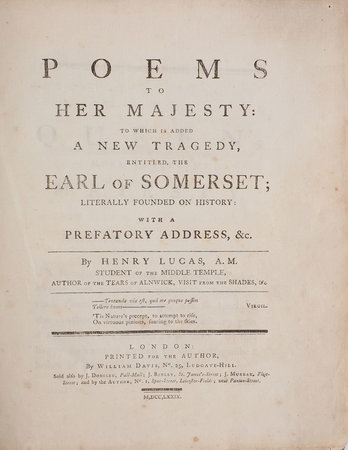 LUCAS, Henry. ~ Poems to Her Majesty: to which is added a new Tragedy, entitled, The Earl of Somerset; literally founded on History: with a prefatory Address, &c.... London: Printed for the Author, by William Davis... Sold also by J. Dodsley... J. Ridley... J. Murray... and by the Author, No. 1, Spur-Street, Leicester-Fields; near Panton-Street. 1779.

First edition. In his long Prefatory Address to the Earl of Somerset, Lucas (c.1740–1802)—the son of Charles Lucas, the radical Irish politician, and ‘a genius whose heart and mind both seem entirely devoted to literature, notwithstanding he appears the student for the bar’ (London Review)—quotes the observations of Samuel Johnson, an acquaintance of his father, on the story on which the play is based (the fall of James I’s favourite, Robert Carr (Kerr), 1st Earl of Somerset, 1587–1645) and even acknowledges Johnson’s assistance in its preparation: ‘permit me thus publicly to express my gratitude, for the peculiar kindness of his perusal, emendations, and good opinion of this work’ (p. xxxv). Johnson, in fact, thought it ‘a poor performance’, but which given it might ‘put money into [Lucas’s] pockets [and] contains nothing immoral or indecent... we may very well wish success’ (quoted in Oxford DNB), and is among the subscribers listed here. Two years later, however, and Johnson was annoyed when Lucas used his name in association with attempts to get the work staged.