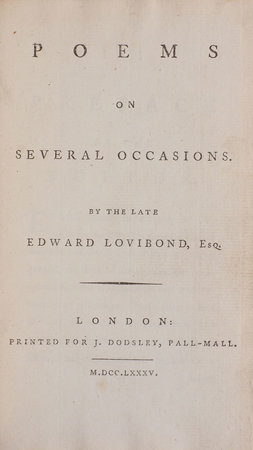 Scarce first edition, published posthumously. Lovibond (1723–1775), an acquaintance of Horace Walpole (who in 1776 bought some pictures ‘at Mr Lovibond’s sale’), lived at Hampton in Middlesex, ‘where he seems to have divided his time between the occupations of rural economy, the amusements of literature and poetry, and the gaieties of elegant society’ (A complete Edition of the Poets of Great Britain, 1792–5). ‘Although it circulated privately in his lifetime, the majority of Lovibond’s poetry was published posthumously as Poems on Several Occasions (1785) under the superintendence of his brother, Anthony Lovibond Collins. Lovibond’s poetical voice chiefly draws its inspiration from Gray, though in the case of “Julia’s Printed Letter” Pope’s “Eloisa to Abelard” is evidently his model. His “demi-platonic” love verses directed to Miss K— P—, identified by Chalmers as Miss Kitty Philips, also suggest the influence of his subject’s namesake, Katherine Philips, the matchless Orinda’ (Oxford DNB). Jackson, p. 117.