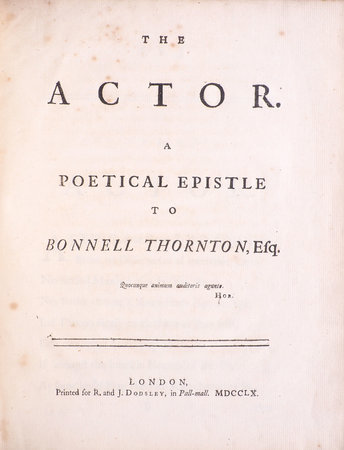 First edition of Lloyd’s popular poem, ‘nominally addressed to Thornton, but in reality an extended panegyric of Garrick as exemplar nonpareil of the actor’s art... Its graceful pentameter couplets express the mid-century fascination with theatrical performance, and particularly with Garrick’s powers in both tragedy and comedy. Garrick’s ability to make the audience feel with him leads Lloyd to mock those conventions of the theatre intended to act directly on the spectators, but he recognizes that the price a great actor pays for his intensity is impermanence; unlike the poet, he takes his art to the grave’ (Oxford DNB). Lowe, Arnott & Robinson 689.