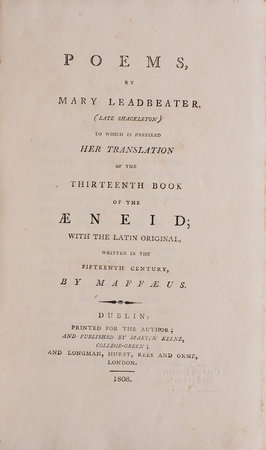 LEADBEATER, Mary. ~ Poems... to which is prefaced her Translation of the thirteenth Book of the Æneid; with the Latin Original, written in the fifteenth Century, by Maffæus. Dublin: Printed for the Author; and published by Martin Keene, College-Green; and Longman, Hurst, Rees and Orme, London. 1808.

First edition, elegantly printed, and on good-quality paper. Mary Leadbeater (née Shackleton, 1758–1826) was a Quaker from Ballitore, Co. Kildare, where her father was the local headmaster. Edmund Burke had attended the school there, and he and Mary corresponded for many years. This, her second book of verse, includes a number of poems relating to Burke (‘The Negro, address to Edmund Burke’; ‘Beaconsfield, the seat of Edmund Burke’; ‘On a report of Edmund Burke’s death, and of his son’s having been lost at sea’; ‘On a visit paid to Ballitore by Edmund Burke and his son’), and publishes three letters written by Burke to Mary, including one ‘dictated by him in his last illness, and signed by his tremulous hand’.

‘As a woman and especially as a Quaker, Mary Leadbeater existed on the margins of early-modern Irish society, yet she proved to be a valuable contributor to the stability and well being of her immediate Quaker community and its neighbouring Irish cottagers. She knew the Irish character well; and her educative writings, which resound so richly with Irish voices, are a permanent record of local Irish idioms and dialects. Thus, her contribution to Irish cultural memory cannot be over-estimated’ (Dictionary of Irish Biography). Jackson, p. 322.