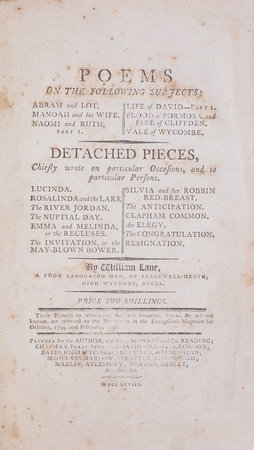 LANE, William. ~ Poems on the following Subjects: Abram and Lot. Manoah and his Wife. Naomi and Ruth, Part I. Life of David—Part I. Flood of Formosa, and Fire of Cliffden. Vale of Wycombe. Detached Pieces, chiefly wrote on particular Occasions, and to particular Persons. Lucinda. Rosalinda and the Lark[.] The River Jordan. The Nuptial Day. Emma and Melinda, or the Recluses. The Invitation, or the May-blown Bower. Silvia and her Robbin Red-Breast. The Anticipation. Clapham Common. An Elegy. The Congratulation. Resignation... [Reading:] Printed for the Author, and sold by Snare and Co. Reading; Chapman... & Mathews... London; Bates, High Wycombe; Burnham, Maidenhead; Miss Hawes, Marlow; Stratten, Risborough; Marlin, Aylesbury; Norton, Henley, &c. &c. &c. 1798.

8vo (212 × 124 mm) in half-sheets, pp. 112; without the errata slip (as in one of the Bodleian copies); some foxing towards the end; contemporary tree calf, rebacked, corners worn.

Sole edition, published by subscription. The author describes himself as ‘a poor labouring man, of Flackwell-Heath, High Wycombe, Bucks.’; the ‘Cliffden’ in the title is the great house Cliveden, near Taplow, previously owned by Frederick, Prince of Wales, which had burned down in 1795. The second half of the book is made up of ‘detached pieces, on various subjects, chiefly wrote on particular occasions, and to particular persons’, among them ‘The Anticipation, on sending a Bundle of Manuscripts to the Editor of a periodical Work...’. Aubin, Topographical Poetry, pp. 307 and 329; Bibliotheca Buckinghamiensis, p. 54; Johnson, 524; not in Jackson.