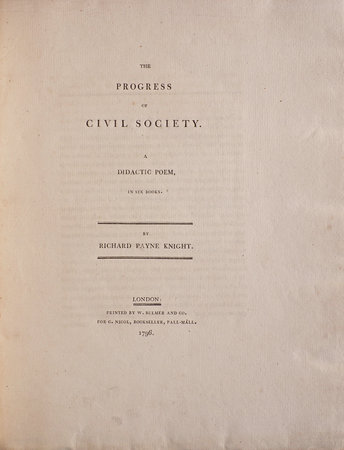 First edition. ‘Knight used landscape as a metaphor to pursue the political and moral issues that preoccupied him: the superstition and bigotry of the Christian church, his claims to freedom of expression, and his opposition to any kind of political and personal oppression. He developed these ideas further in a second long, didactic poem, The Progress of Civil Society (1796), an encyclopaedic investigation into the history of mankind, progressing from international to national, and personal interrelations between peoples and people. Like Winckelmann, Knight regarded fifth-century Greece as the culmination of civil society and he linked its success to the political and personal freedoms enjoyed by its citizens. In modern times he saw, with Montesquieu, religious superstition, repressive government, and personal bigotry as the cause of mankind’s decline. “Missing the mood of the moment” (Ballantyne), Knight ended his poem with an enthusiastic endorsement of the French Revolution, which, despite his condemnation of the violence of the terror, understandably further antagonized his critics, who attacked him in conservative journals such as the British Critic and The Anti-Jacobin’ (Oxford DNB). Jackson, p. 212.