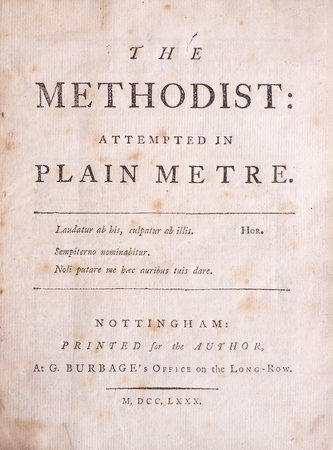 First edition, dedicated to ‘the people called Methodists in general—more especially to the Reverend the Clergy, and the Lay-Preachers in Connection with the Rev. John Wesley’.

Kershaw was an itinerant Methodist preacher from Halifax, who accompanied Wesley on some of his journeys to the North of England, and Scotland. In about 1770 he settled at Gainsborough, Lincolnshire, where ‘much of his leisure... was devoted to writing. In 1780 he published An Essay on the Principal Parts of the Book of the Revelations. The same year his epic poem The Methodist Attempted in Plain Metre was published in Nottingham. Wesley’s disapproval was less on the grounds of its lack of literary merit than for fear that it brought reproach on the Methodists and would hinder the sale and reading of more profitable literature. As a result, the Methodist conference of 1781 decreed that in future no preacher should publish until the text had been seen and edited by Wesley, and that any profits from such publications should be paid into a common fund’ (Oxford DNB). Not in Jackson; no in Johnson.