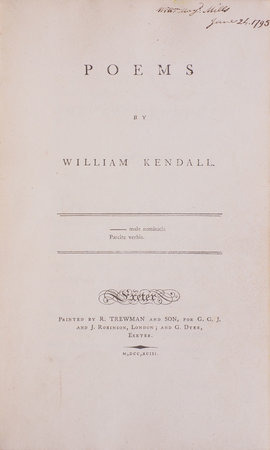 First edition, reprinting some the verse from Kendall’s earlier, privately printed collection, but with much new material, including ‘Imitations of Catullus’, the Latin printed on facing pages, and the long sequence ‘Fairy Fantasies’.

‘That Fairy personification, with distinct scenery and appropriated action, would introduce new combinations of music, was originally an idea of Mr. Jackson, perfectly coincided with the Author’s opinion. His idea was not erroneous. The Fairy Fantasies are splendid efforts of genius as musical compositions: Their claim to merit in the poetical view, the reader must determine. To this class some new Songs were added after the completion of Mr. Jackson’s music: He composed them agreeably to the first sketches, and although they have been since amended, in a few instances, the corrections could not be adapted to music’ (Advertisement). Jackson, p. 185; Johnson, 504