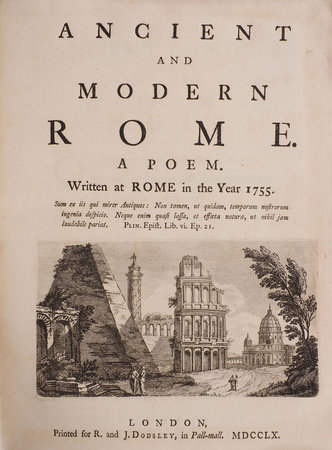 BROWN, John. The Cure of Saul. A sacred Ode. As it is performed at the Theatre-Royal in Covent-Garden... Set to select Airs, Duets, and Choirs, from Handel, Marcello, Purcel [sic], and other eminent Composers... London, Printed for L. Davis and C. Reymers... Printers to the Royal Society. 1763. [And:]

CHURCHILL, Charles. The Prophecy of Famine. A Scots Pastoral... Inscribed to John Wilkes, Esq;... The second Edition. London: Printed for the Author, and sold by G. Kearsly... 1763. [And:]

[MASON, William]. Caractacus, a dramatic Poem: written on the Model of the Ancient Greek Tragedy. By the Author of Elfrida... London: Printed for J. Knapton... and R. and J. Dodsley... 1759.

A fine verse Sammelband, comprising an impressive group of some major poems of the 1750s and 60s, all but one title (Churchill, Prophecy of Famine) in FIRST EDITION. Ancient and Modern Rome was Keate’s first poem, praised by Voltaire, who became a close friend when Keate made his acquaintance in Geneva in 1756. Pollio, an elegiac Ode, while unattributed by ESTC, is usually ascribed to William Julius Mickle, Scots-born translator of the Lusiad (1770). Mason’s Caractacus was described as ‘a prodigiously fine thing’ by Warburton.