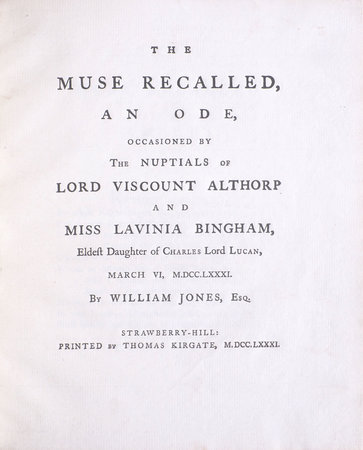 First edition. 250 copies were printed. ‘An epithalamium on the occasion of [Jones’s] former pupil’s marriage written at the insistence of Georgiana, duchess of Devonshire (the groom’s sister), and printed by Horace Walpole at the Strawberry Hill Press under the direction of Charles Bingham, first Baron Lucan (the bride’s father)’. Feted bibliophile John George Spencer, viscount Althorp, ‘married on 6 March 1782 Lady Lavinia Bingham (1762–1831), the eldest daughter of Charles Bingham, first earl of Lucan, and his wife, Margaret Bingham, née Smith (c. 1740–1814), a miniature painter. Lavinia Spencer [also an artist] was a strong-minded and strong-willed woman of great erudition and charm and was perhaps the pre-eminent hostess in London society. Both at Althorp and Spencer House in London the Spencers delighted in entertaining the foremost intellectual and political leaders of their time. Of their eight children, four sons and two daughters reached maturity’ (Oxford DNB).

Besides celebrating the marriage, The Muse recalled is ‘elegantly laced with oppositional ideology. The climax... scourges contemporary decadence; Freedom and Concord are depicted departing for the “purer soil” and “more congenial sky” of Delaware in a radical paean saluting America as the asylum of liberty. At this time Jones was also contemplating emigration westwards, and his association with Americans such as Henry Laurens and Arthur Lee in London and John Adams and Benjamin Franklin in Paris made it seem more likely that the future would see him a legislator on the banks of the James river than (as remained his expressed ambition) a judge on the banks of the Hooghly’ (Oxford DNB). Hazen 28; Jackson, p. 88.