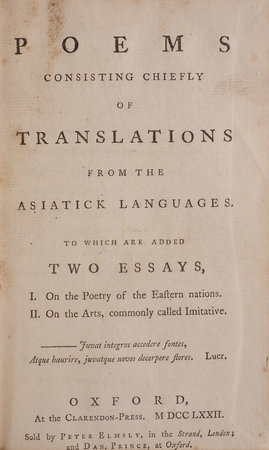 [JONES, Sir William]. ~ Poems consisting chiefly of Translations from the Asiatick Languages. To which are added two Essays, I. On the Poetry of the Eastern nations. II. On the Arts, commonly called Imitative... Oxford, at the Clarendon Press, 1772.

8vo (177 × 113 mm) in half-sheets, pp. [4], viii, 217, [3]; complete with final errata leaf (some of these amended in the text in early ms ink); scattered light foxing in places, a few fingermarks to the title; contemporary marbled calf, spine gilt in compartments, old shelfmark at foot.

First edition of the first book of poetry by the great Oriental scholar. ‘The success in 1772 of Poems, Consisting Chiefly of Translations from the Asiatick Languages owed much to the fashionable craze for things oriental; according to Elizabeth Montagu, “The descriptions are so fine, & all the objects so brilliant, that the sense aches at them!” As a poet Jones blended philosophical allegory and dramatic narrative into the genre of the oriental verse tale, but as a scholar he created, through his concern for accuracy of translation and comparative linguistic method, a demand for genuine Eastern products while significantly adjusting racial and political stereotypes... Two essays which Jones included in this volume are highly significant in terms of the history of criticism, as they install the lyric at the centre of poetry. “On the poetry of the Eastern nations” establishes Jones as a major precursor of the Romantics’ (Oxford DNB). Also included is ‘Caissa, or, the Game of Chess, a Poem. Written in the Year 1763.’ The poem, in heroic couplets, tells the story of Caïssa, who initially repels the advances of the god of war, Mars. Spurned, Mars seeks the aid of the god Euphron (Jones’s invention), brother of Venus, who creates the game of chess as a gift for Mars to win Caïssa’s favour. Jackson, p, 15.