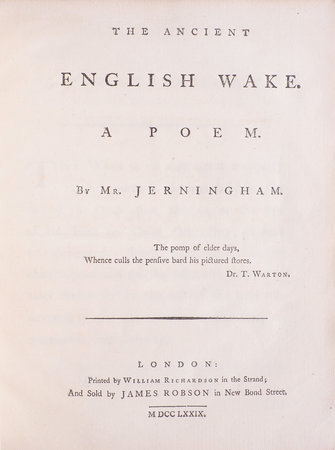 First edition, the rare issue with ‘and sold by James Robson’ (rather than ‘for James Robson’) in the imprint. ESTC locates 3 copies only, at Lampeter and Harvard (2 copies).

‘The Wake is of very great antiquity in this country. It was held on the day of the Dedication, that is, on the day of the saint to whom the village church was dedicated. Booths were erected in the church-yard and on the adjacent plain, and after divine service the rest of the time was devoted to the occupations of the fair, to merriment and festivity. The merchants, who frequented the fairs in numerous caravans or companies, employed every art to draw the people together. They were therefore accompanied by jugglers, minstrels, and buffoons’ (Advertisement). Jackson, p. 69.