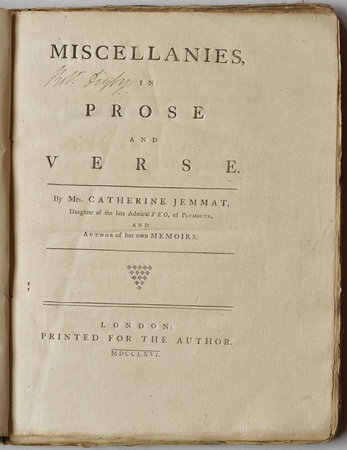 JEMMAT, Catherine. ~ Miscellanies, in Prose and Verse... London: Printed for the Author. 1766.

First edition, published by subscription. Jemmat (c.1714–1766?) is described on the title-page here as the ‘daughter of the late Admiral Yeo, of Plymouth, and Author of her own Memoirs’ (1762, 3 copies recorded; second edition 1765, 2 copies recorded); the new entry for her in Oxford DNB catalogues a life of domestic abuse, first by her father, then her husband, an alcoholic silk mercer.

The book is largely made up of occasional pieces, but all the more interesting for it: ‘On the Success of Major-General Johnson in America’, ‘On the late Earthquakes in England and Ireland’ (there are a number of works here with a Dublin connection), ‘A Prologue at a Benefit Play for an Hospital’, ‘On the Invention of Letters and the Utility of the Press’, ‘On the Report of Mr. Sheridan’s giving a Benefit-Play towards defraying the Expence of Dr. Swift’s Monument, in the Year 1752’, ‘A Poem on the Art of Printing’, ‘To the inimitable Mrs. Woffington, on seeing her in several Characters’, ‘On seeing Mr. Barry perform the Parts of Othello, Romeo, Jaffier, and Castalio’. An essay (in prose) ‘in Vindication of the Female Sex’ takes up pp. 101–8. There is a long subscribers’ list. Lonsdale 156.