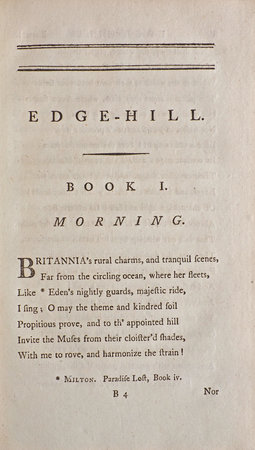 JAGO, Richard. ~ Edge-Hill, or the rural Prospect delineated and moralized. A Poem in four Books... London, Printed for J. Dodsley... 1767.

First edition, printed by William Bowyer and John Nichols; their records show 600 copies printed on demy and 600 on royal (Maslen & Lancaster, Bowyer Ledgers, 4662). There is a long list of subscribers, from the Archbishop of Canterbury to various Midlands book societies.

Edge-Hill is Jago’s major work, and one of the most influential descriptive poems of its time. The author, ‘a country gentleman in a leisurely century’ (Aubin), considered ‘not only the local landscape [of Warwickshire] that he loved but also theories about how mountains came into being, his reminiscences of Somervile and Shenstone [a lifelong friend], and reflections on the earl of Leicester’s entertainment of Queen Elizabeth at Kenilworth Castle, ending with an account of the civil war battle of Edgehill in 1642’ (Oxford DNB).

Jago (1715–1781) endeavours to make his poem ‘extensively interesting’ by the ‘frequent Introduction of general Sentiments, and moral Reflections; and to enliven the descriptive Part by Digressions, and Episodes belonging to, or easily deducible from the Subject’ (p. vii). ‘Jago is important as an early expounder of principles to govern descriptive-topographical poetry and as an influential practitioner of Thomsonian blank verse’ (Aubin). Aubin, Topographical Poetry, pp. 91–2.