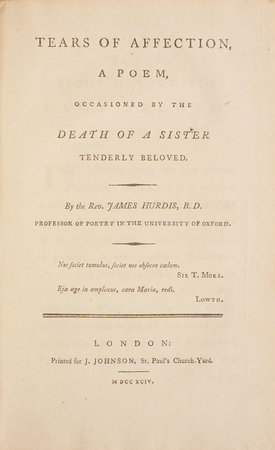 HURDIS, James. ~ Tears of Affection, a Poem, occasioned by the Death of a Sister tenderly beloved... London: Printed for J. Johnson... 1794.

8vo (194 × 121 mm), pp. vi, [2], [7]–[60], [2] fly-title for ‘The Bouquet, a Collection of scattered Pieces’, [61]–90, [2]; complete with half-title and final leaf of advertisements (‘Proposals for printing by Subscription, a Series of Lectures... [on] Poetry’, with a list of Hurdis’s others works on the verso); a few spots to final leaf; recent quarter vellum; pencil ownership inscription of A[nn?]. Thomas to half-title; booklabels of Simon Nowell-Smith and Judith Adams Nowell-Smith.

First edition. ‘Hurdis’s Wealden idyll was terminated by the death of Catherine, his favourite sister, on 7 August 1792. The previous year he had been appointed to the living of his native village and, convinced that he could never again enter the house at Burwash, resigned his curacy and returned to his mother and sisters at Bishopstone. His long letter to Cowper describing Catherine’s last days produced a pressing invitation to William Hayley’s house at Eartham near Chichester, where Cowper, George Romney, and Charlotte Smith were guests. Hurdis’s broken heart dominated his stay, and he left on a feigned excuse. At the end of September he wrote to the president of Magdalen, expressing his intention to return to Oxford and requesting help in recruiting pupils. Unable to find a suitable home, Hurdis spent a miserable winter in Sussex, composing the blank verse Tears of Affection (published 1794) in Catherine's memory’ (Oxford DNB). Jackson, p. 195.