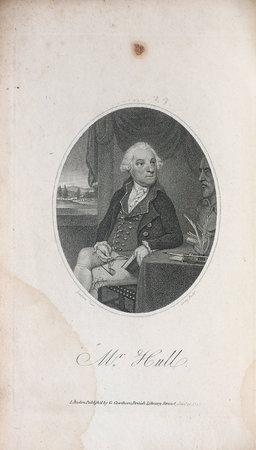 HULL, Thomas. ~ Moral Tales in Verse, founded on real Events... Dedicated, by Permission, to His Grace the Duke of Leeds... Vol. I. London: Printed for, and under the Direction of, George Cawthorn... 1797.

2 vols bound in one, 8vo (211 × 130 mm) in half-sheets, pp. viii, 124; 200; including an engraved frontispiece portrait by Leney after Graham, but without the list of subscribers; some scattered spotting, short wormtrack in the fore-margin towards the beginning, marginal waterstaining in places, creases and a couple of short tears to the margins of the final few gatherings; contemporary tree calf, corners worn, rear board sometime bent with resultant creases and one short tear, some insect damage to lower joint at foot, flat spine attractively gilt; old ink ownership inscription to front endpapers.

First edition. ‘We highly approve of the intent of this publication. To preserve the memory of those remarkable instances in which human actions have received temporal reward or punishment, is a good and useful task; more particularly when they are so commemorated, that, while the oldest and wisest of us may read the narrative with pleasure, it is calculated to amuse the young, and impress upon them the belief of an over-ruling Providence. Such has being the aim of Mr. Hull; and he has well executed his plan. His versification is simple, easy, and occasionally animated: the stories which he has chosen are interesting; and they are developed with judgement. A dedication in verse is prefixed to every tale; and in these little pieces author has expressed the best feelings of friendship and affection, in a manner that reflects honour upon the pallets and the man’ (Critical Review).

The tales themselves all have something of the supernatural about them, or featuring strange coincidences. As Hull himself remarks: ‘I have ever, even from childhood, felt my attention peculiarly engaged by stories related in company, which have contained in them any thing of the marvellous and supernatural’ (p. viii). Jackson, p. 219.