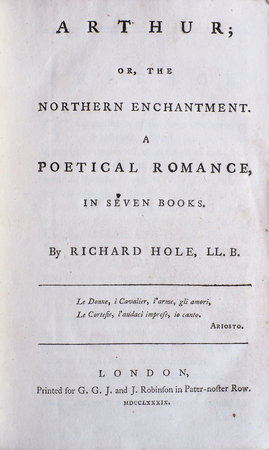 —————. Remarks on the Arabian Nights’ Entertainments; in which the Origin of Sinbad’s Voyages, and other Oriental Fictions, is particularly considered... London: Printed for T. Cadell, Junior, and W. Davies, Successors to Mr. Cadell... 1797.

First editions. Aside from his translations, these are the only two separately published works by Hole, and are both inscribed: ‘John Hole ex dono auctoris’ and ‘donum Autoris’.

‘Hole’s major work, Arthur, or, The Northern Enchantments (1789), is a romance epic in seven books which in places imitates Homer, Virgil, Ariosto, and Spenser. But Ossian is the presiding influence in the first Arthuriad to recreate the manners and belief systems of fifth-century Britain. In an original story Arthur’s Britons, allied with the Irish, repel a horde of invading Saxons and Scandinavians. Supernatural forces figure largely as Merlin, whose daughter is betrothed to Arthur, is pitted against Urda and the Weird Sisters, who assist Hengist. The historical and geographical setting suggests that the Exeter poet was attempting to do for west Britain what Macpherson’s Ossian had done for Scotland’ (Oxford DNB). Jackson, p. 146.