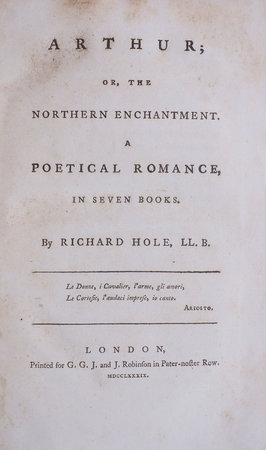 8vo (215 × 135 mm) in half-sheets, pp. xviii, [19]–84; bound after a copy of Arthur (1789; see next item) in contemporary tree calf, joints cracked but firm, flat spine gilt in compartments, rubbed; inscribed ‘H. Ellicombe – From the Author’ on the flyleaf, and ‘Richard Ellicombe, the Bequest of his Mother’ on the verso of the front free endpaper; engraved Ellicombe bookplate.

First edition, presentation copy. Hole was an Exeter clergyman with literary interests. ‘At the request of Samuel Badcock, he rendered into English verse the poem known as “Homer’s Hymn to Ceres,” and the translation was published at Exeter in 1781. It was subsequently reprinted in Anderson’s “Collection of the Poets”; Whittingham’s edition of the “British Poets;” “Works of the Greek and Roman Poets translated,”; Wakefield’s edition of Pope’s version of the “Odyssey,”; and in the “Minor Poems of Homer,” New York, 1872’ (DNB). Jackson, p. 87.