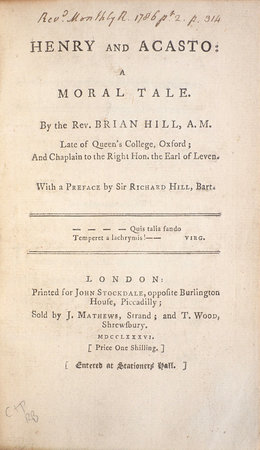 First edition, presentation copy, with a preface by the author’s brother Sir Richard Hill, in which he writes that ‘the author of the poem was totally ignorant of it’s [sic] being sent abroad into the world. It was by mere accident that I first got a transient sight of it, and not till after repeated requests that I obtained a copy of it; and had I then intimated the most distant wish of printing it, (particularly with his name and annexed,) I know that his great humility and diffidence would never have permitted him to let me have it in my possession: but as I feel conscious, that, whilst I render a service to the public, I do him no discredit, adventure to send it out in it’s native simplicity’ (p. v).

The author, of Weston, Shropshire, was chaplain to the Earl of Leven and Melville, and the author of Observations and Remarks in a Journey through Sicily and Calabria (1792). Jackson, p. 123. Rare: ESTC locates 7 copies only (BL, Glasgow, Queen’s College Oxford, ULL, Huntington, Wisconsin, Yale).