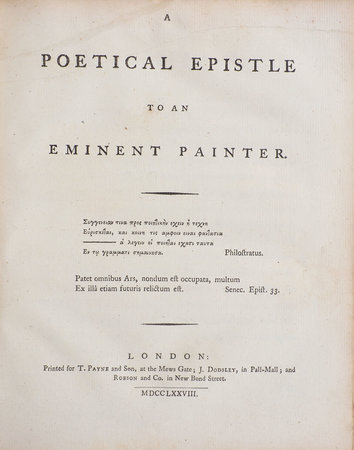 First edition of Hayley’s first separately published work, an ‘ingenious and well-written poem’ (Monthly Review) addressed to Hayley’s close friend, George Romney. ‘John Romney later regarded Hayley as a bad influence on his father, but Hayley’s company acted as a release for many of the suppressed tensions in Romney’s life. In the critical vacuum in which Romney worked, Hayley’s constant encouragement and flattery provided a much-needed boost to morale. His invitations to Romney to visit his country house at Eartham in Sussex, where Romney spent several weeks every summer or autumn, gave him the opportunity to relax, to paint and draw in a more liberated manner, and to meet stimulating company among Hayley’s friends in an unthreatening atmosphere’ (Oxford DNB). Barker, ‘Some notes on the bibliography of William Hayley, Part I’, Transactions of the Cambridge Bibliographical Society Vol. 3, No. 1 (1959), pp. 103-112, 1; Jackson, p. 65.