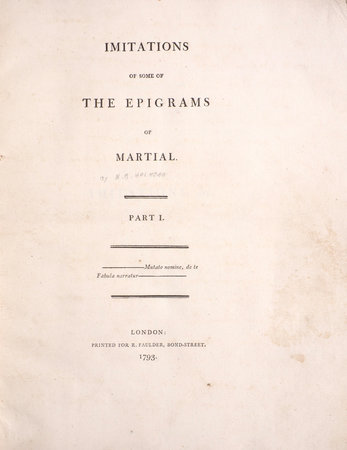 First editions. Parts III and IV followed in 1794. All are scarce due, presumably, to their having been ‘suppressed on account of their personal allusions’ (DNB).

Halhed (1751–1830) was friends with Sheridan at Harrow, and they collaborated on the bawdy Love Epistles of Aristaenetus (1771). They shared, too, an affection for the singer Elizabeth Linley; when she married Sheridan, Halhed went to India, where he befriended William Jones and Warren Hastings, and set up what became the East India Company Press in Bengal.

These lively adaptations of Martial to the modern age were composed after Halhed’s return to Britain, with all manner of contemporary references, i.e. Rights of Man, Renwick Williams the ‘Monster of London’ condemned in 1790 for assaults on various women, Newgate, Grub Street, the poetry of Pindar. Alexander Gordon, writing in DNB, remarks that they ‘show a keen power of epigram’.

These copies, though recently preserved in modern wrappers, retain extensive manuscript notes, apparently by one W. P. Stawell, whose name appears on the front free endpaper. Some of these contains dates in the 1830s and 1840s and are all apparently in the same hand. Mostly verse, some are obviously extracts or copies from printed sources, but some may be original. They include ‘Lines of Buchanan on his Mistress’, ‘A Retort’ (beginning ‘A pert young Barrister Hibernia’s son’), a transcription from the tomb of Joseph Palmer in Exeter Cathedral’ and (most interestingly), ‘On the new Penny Postage Plan Jany 10 1840’ (’By corresponding circumstances fired / A rage for Letter-writing has mankind inspired / Millions write letters who ne’er wrote before / And those who wrote, write millions more...’). Jackson p. 183.