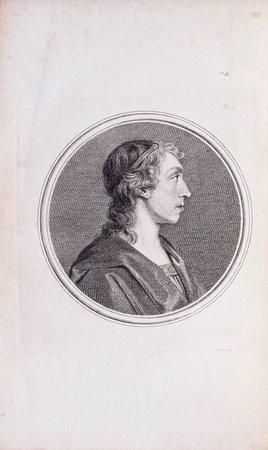 First edition thus, the issue with ‘Edinburgh’ in the imprint measuring 47 mm (rather than 32 mm) and the notice of entry in Stationers Hall on the title verso in three lines with type ornaments above and below (rather than two lines and without the ornaments).

Hamilton (1704–1754), Jacobite patriot and poet, and a friend of Hume and Adam Smith, is best known for ‘The Braes of Yarrow’ (‘Busk ye, busk ye, my bonny bonny bride’) and his ‘Ode to the Battle of Gladsmuir’. He fought at Culloden, before escaping to France in 1746; he died at Lyons. ‘While he was in exile Hamilton’s Poems on Several Occasions was published anonymously under the editorship of Adam Smith [his first publication] by the Foulis Press, Glasgow, in 1748 and 1749. A second edition was published under the author’s name in 1758, and the best text was published at Edinburgh in 1760, with a preface and engraving (taken from Gavin Hamilton’s portrait) by Sir Robert Strange’ (Oxford DNB).