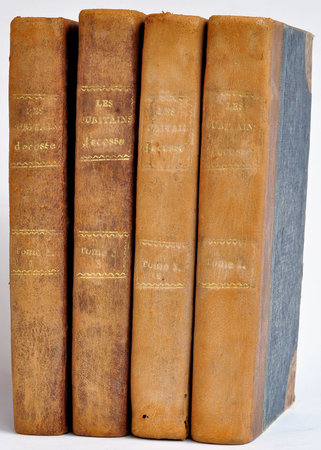 First editions in French of the two novels Old Mortality and The Black Dwarf (1816) (which had appeared in the first series of Scott’s Tales of my Landlord), only the second volume of Scott’s fictional works to appear in France (after Guy Mannering). Pseudonymously issued, both in Britain and France, it was listed under the pseudonym ‘Cleisbotham’ in the Bibliographie de France. This is the first of Auguste-Jean-Baptiste Defauconpret’s translations and marks the beginning of Scott’s celebrity in France: ‘the first considerable success’ (Dargan). It is also one of the most influential of Scott’s works in France. ‘Defauconpret’s Les Puritains d’Ecosse gave Scott his first French success and first major European breakthrough. Although partially obscured by Ivanhoe and Quentin Durward, it remained for many Frenchmen the Scott novel Par excellence. Stendhal is among many to call Scott not ‘the author of Waverly’ but ‘the author of Old Mortality’ Often critical of Scott, Stendhal remained an unswerving admirer of Old Mortality’ (Barnaby). It was also frequently alluded to by Balzac throughout La Comédie Humaine.

On the strength of its immediate success, the publisher, Nicolle (the predecessor of Gosselin) engaged Defauconpret to translate subsequent novels as they appeared. Bearing in mind its tremendous influence on French European literature, the French edition is remarkably rare. E. Preston Dargan, ‘Scott and the French Romantics’, PMLA, Vol. 49, No. 2 (Jun 1934), 2 & 3 (May 3); Paul Barnaby, ‘Another Tale of Old Mortality: The Translations of Auguste-Jean-Baptiste Defauconpret in the French Reception of Scott.’ in Pittock, ed., The Reception of Sir Walter Scott in Europe, 2006; Garside, Raven and Schöwerling, The English Novel 1770-1829, 1816: 53. OCLC lists copies at Bn, NLS, Universities of Edinburgh, Leipzig and Princeton.