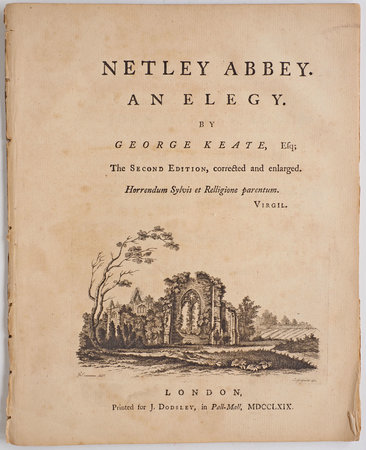 Second edition, with a ‘Short Account of Netley Abbey’ and the title engraving, ‘faithfully taken on the Spot from the East End of the Abbey, a Point of View, in which it makes the most picturesque Appearance’ (p. 8). ‘It was first published in 1764, and now has received considerable alterations and additions; but the ingenious author modestly desires it may be understood, the neither the one nor the other were made in consequence of any supposed merit of its own, but merely to preserve the memory of an ancient ruin, which has alternately suffered from weather, and the ill taste of its owners, to such a degree, that they who seek it a few years hence, may find it only in this description’ (Critical Review).