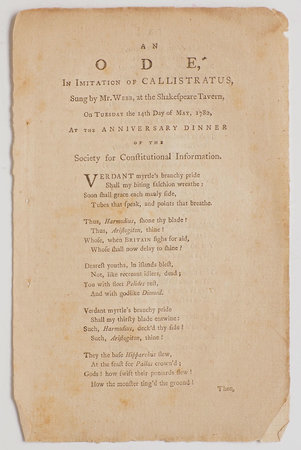 [JONES, Sir William]. ~ [Drop-head title:] An Ode, in Imitation of Callistratus, sung by Mr. Webb, at the Shakespeare Tavern, on Tuesday the 14th Day of May, 1782, at the Anniversary Dinner of the Society for Constitutional Information. [?London, 1782.]

There was another printing, in folio (pp. 3, [1]), the same year. Jones wrote this pro-Whig piece, the last of his political odes, having been elected in March 1782 a member of the Society for Constitutional Information, one of the most influential radical societies of the time. The same year the Society distributed copies of Jones’s ‘libellous’ Principles of Government, in a Dialogue between a Scholar and a Peasant, written at Ben Franklin’s house in Paris, in which he advocated universal manhood suffrage and annual parliaments.