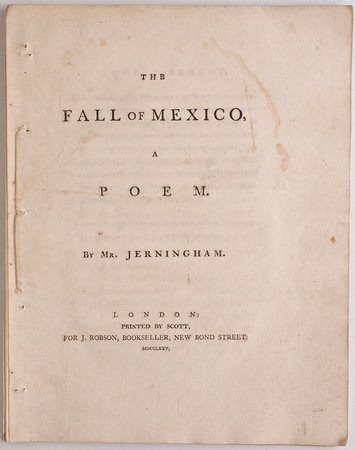 First edition. ‘Guatimozino, the last emperour of Mexico, having opposed the Spaniards with great bravery, in various engagements, was at length defeated and taken prisoner. In order to extort from him a discovery of the principal mines, he was laid on burning coals: The second in command was also condemn’d to the same torture, and amidst his sufferings called upon his royal master to be released from the vow of secrecy, which drew from Guatimozino these memorable words: Am I on a Bed of Roses? Dryden put these words into the mouth of Montezuma contrary to the testimony of the historians’ (Advertisement). Jackson, p. 37; Sabin 36060.