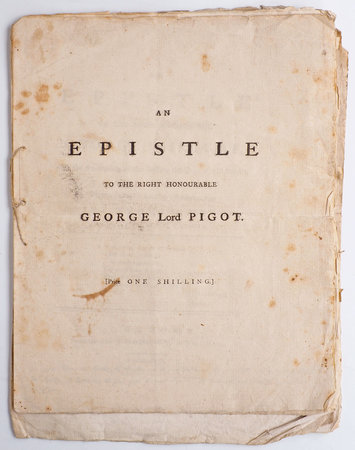 [IRWIN, Eyles]. ~ An Epistle to the Right Honourable George Lord Pigot, on the Anniversary of the Raising of the Siege of Madras. Written during his Lordship’s Confinement at Saint Thomas’s Mount... London: Printed for J. Dodsley... 1778.

Irwin (1751–1817), an East India Company servant, wrote a number of poems with an Indian flavour. ‘In 1776 he became caught up in the political storm that overtook the governor of Madras, George Pigot, who was placed in confinement by members of his own council. Irwin supported Pigot, and in August he was suspended from the company’s service. Early in 1777 he left India in order to seek redress in England’ (Oxford DNB). His poem on the affair was written during the voyage; Pigot himself died a few months later. Jackson, p. 62.