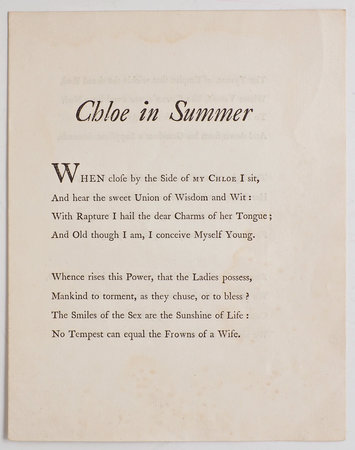 Sole edition. In the late 1970s, a small cache of copies of this poem, some with a decorative watermark, others watermarked ‘1797’ as here, were apparently discovered at the Senhouse family home near Maryport, Cumbria. A number of the 12 copies located by ESTC came from this cache, sold by the late C. R. Johnson: British Library, Bodley, Cambridge, NLW, NLS. The present copy may well be the last from the cache not in an institution.

The suggestion that the printer was Ann Dunn of Whitehaven is based upon the existence of four four-page poetical pamphlets of apparently the same date, of very similar appearance and with the same or similar watermarks. These appear in ESTC as Chloe in Summer [Whitehaven?: printed by Ann Dunn?, 1797?]; Paddy in Extasy ‘A. Dunn, printer, Whitehaven’ [1797?]; A Song made by Sir Joseph Senhouse, on the 27th of November 1794, being the Birth Day of his Nephew Humphrey Senhouse Junior of Netherhall, when he attained to the Age of twenty one Years [London? 1794?]; and The Wish [Whitehaven?: printed by Ann Dunn?, 1795?].

Only one of these has the printer’s name and place of printing, and only one gives an author’s name, but they point to all four having been written either by Sir Joseph Senhouse or someone in his immediate circle and printed by Ann Dunn in Whitehaven, who was responsible for producing a number of books in the 1790s. Not in Jackson; Johnson, 184.