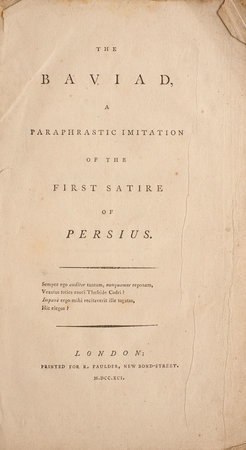 [GIFFORD, William]. ~ The Baviad, a paraphrastic Imitation of the first Satire of Persius. London: Printed for R. Faulder. 1791.

First edition. Born in humble and unpromising circumstances at Ashburton, Devon, Gifford succeeded in gaining entry to Exeter College, Oxford, where he honed his remarkable skills in poetry and translation.

‘During the 1790s Gifford established a name as a verse satirist in The Baviad (1791) and The Maeviad (1795), “the first satires of the day’” to Lord Byron's mind, neo-classical imitations of Persius and Horace in the manner of Alexander Pope which savagely attacked (both on poetic and political grounds) the then voguish Della Cruscan school of Robert Merry, Hannah Cowley, Edward Jerningham, Mary Robinson, Thomas Vaughan, John Williams, and others... Late in 1797 one of Gifford's victims, the satirist Williams (‘Anthony Pasquin’), unsuccessfully sued him for a supposed libel contained in a note to the Baviad (a trial gleefully recorded in succeeding editions of Gifford's satires). Throughout the Baviad Gifford's heart, in the true Juvenalian manner, “burns dry with rage”... The Baviad was seen in its day as the greatest contemporary exercise in classical satire’ (Oxford DNB). Jackson, p. 163.