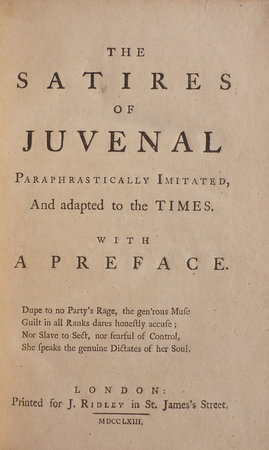 [GREENE, Edward Burnaby]. ~ The Satires of Juvenal paraphrastically imitated, and adapted to the Times... the second Edition with Additions. London: Printed for J. Ridley, 1763.

First edition. Edward Burnaby Greene (d. 1788) was variously a poet, translator, brewer and bibliophile. In 1765 he produced The Laureate, a poem in which Samuel Johnson was extensively abused. He was a prolific translator from the classics, though his version were rarely praised. One critic in 1782 remarked that ‘Greene's versions of Pindar, Anacreon, and Juvenal.. may all be seen “at Mr Brich's Pastryshop (late Horton's) opposite the Royal Exchange, and at all the principal Cheesemongers in London and Westminster”’ (cited in the Oxford DNB).