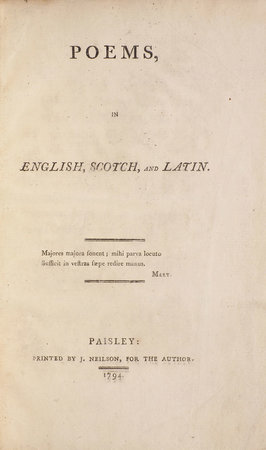 Sole edition of Scots poet Grahame’s first published book. It contains ‘On Burns the Scottish Poet’, the ironically-titled ‘An unanswerable argument for the slave trade’; and a Latin translation of part of Burns’s ‘To a Mouse’.

‘He was educated at Glasgow grammar school and at Glasgow University. Against his own inclination to study for the church, he was then apprenticed to his cousin, Laurence Hill, a writer to the signet, in Edinburgh. Despite his dislike of the work and uncertain health, he completed his apprenticeship, and on 11 December 1788 was admitted a member of the Society of Writers to the Signet. On the death of his father in 1791 he contemplated a change of profession, and he eventually became an advocate in 1795’ (Oxford DNB). He later won the approval of Walter Scott but was the target of one of Byron's barbed comments in English Bards and Scotch Reviewers (1809) Jackson p. 193; not in Johnson.