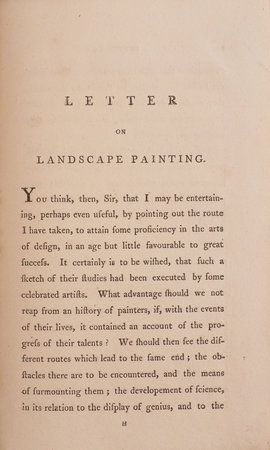 GESSNER, Solomon. ~ Idyls, or Pastoral Poems; to which is annexed, a letter to M. Fuesslin, on Landscape Painting. Translated from the German... Edinburgh: Printed for W. Mudie, and Arch. Constable. 1798.

This Scottish edition of Gessner’s universally popular poems exists in two issues, one with our imprint, the other with the addition of ‘John Murdoch, Glasgow’. Both are scarce.

Included is the ‘Letter to M. Fuesslin, on Landscape Painting’, which had first appeared in an edition of 1776. This letter from Gessner to his godson Henry Fuseli was a pioneering text for the Romantic movement and exerted a powerful influence on English artists, including John Constable. Jackson, p. 226.