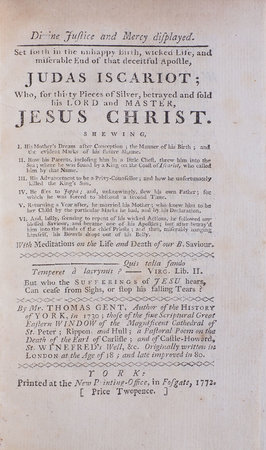 GENT, Thomas. ~ Divine Justice and Mercy displayed. Set forth in the unhappy Birth, wicked Life, and miserable End of that deceitful Apostle, Judas Iscariot; Who for thirty Pieces of Silver, betrayed and sold his Lord and Master, Jesus Christ. Shewing, I. His Mother’s Dream after Conception; the Manner of his Birth; and the evident Marks of his future Shame. II. How his Parents, inclosing him in a little Chest, threw him into the Sea; where he was found by a King on the Coast of Iscariot, who called him by that Name. III. His Advancement to be a Privy-Counsellor; and how he unfortunately killed the King’s Son. IV. He flies to Joppa; and, unknowingly, flew his own Father; for which he was forced to abscond a second Time. V. Returning a Year after, he married his Mother; who knew him to be her Child by the particular Marks he had, and by his Declaration. VI. And, lastly, seeming to repent of his wicked Actions, he followed our blessed Saviour, and became one of his Apostles; but after betray’d him into the Hands of the chief Priests; and then, miserably hanging Himself, his Bowels dropt out of his Belly. With Meditations on the Life and Death of our B. Saviour. By Mr. Thomas Gent, Author of the History of York, in 1730; those of the fine Scriptural Great Eastern Window of the Magnificent Cathedral of St. Peter; Rippon, and Hull; a Pastoral Poem on the Death of the Earl of Carlisle; and of Castle-Howard, St. Winefred’s Well, &c. Originally written in London at the age of 18; and late improved in 80. York: Printed at the New Printing-Office, in Fossgate. 1772.

This was the last printed work by a prolific Irish-born printer active in York for over 50 years, printing sermons, school texts, classical works, literary works, playbills for the York theatre and topographical publications (some of which are named on the title-page here). ESTC notes that this was also issued as part of: The Pious and Poetical Works of Mr. Thomas Gent, [1772?], and as part of: Poetical Pieces by Thomas Gent, [1772?]. Jackson, p. 13.