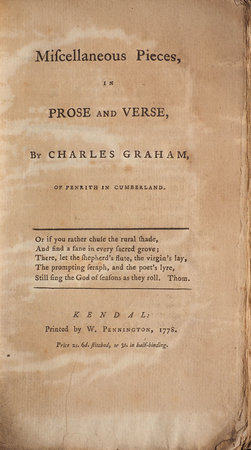 GRAHAM, Charles. ~ Miscellaneous Pieces, in Prose and Verse, by Charles Graham, of Penrith in Cumberland. Kendal: Printed by W. Pennington. 1778.

Sole edition, an attractive Westmoreland imprint. Graham describes himself in the preface as a ‘mechanic who was never taught the rudiments in the English language.’ The collection includes ‘To a friend in America. A poetical epistle’, ‘On John Wesley’s Address to the Americans’, ‘A Pastoral Dialogue, in the Cumberland Dialect’ and an essay ‘On the savage Diversion of Cock-fighting.’ The work was announced by the Cumberland Chronicle and Whitehaven Public Advertiser in March 1778: ‘We are informed, that Mr. Charles Graham, of Penrith, intends speedily to publish, by subscription, a collection of Miscellaneous Poems, Essays, Original Pieces, &c.- and, as several of Mr. Graham's productions have been noticed by the ingenious Mr. Dodsley, and published in his Annual Register, it is not doubted but this collection will meet with every wished for encouragement...’ It also includes ‘A Soliloquy on the late Dr. William Dodd’, to the memory of the erstwhile ‘Macaroni Parson’ hanged for forgery in 1777.

Among the subscribers is Richard Wordsworth, Jr., son of Richard Wordsworth of Whitehaven, William's cousin. Other subscribers are a cross-section of Cumberland society, including Henry Curwen, William Cockin, John Heysham, M.D., Thomas Lowthion (poet), Senhouse and others. Not in Jackson; not in Sabin; ESTC: BL, Cambridge, Lancaster, Bodley (2), Cornell, Lilly, Chicago, Michigan, Yale and Otago.