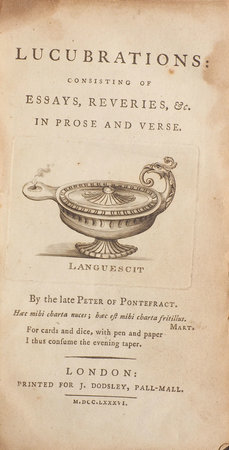 [GRAVES, Richard]. ~ Lucubrations: consisting of Essays, Reveries, &c. in Prose and Verse. By the late Peter of Pontefract. London: Printed for J. Dodsley. 1786.

Sole edition. The title bears an appropriate image of a classical lamp, with the text ‘Languescit.’ The collection contains several important poems, notably ‘Werter to Charlotte’ and ‘On Suicide’ (which first appeared in Dodsley’s edition of The Sorrows of Werther of 1784); ‘Elegy on the Death of Dr. Samuel Johnson. To Sir Joshua Reynolds’ and ‘To Thomas Gainsborough, Esq. On his Portraits of the Three Princesses.’ Graves had sat for a portrait by Gainsborough, whose portrait of the three princesses (Charlotte, Augusta and Elizabeth) was completed in 1784. Jackson, p. 124.