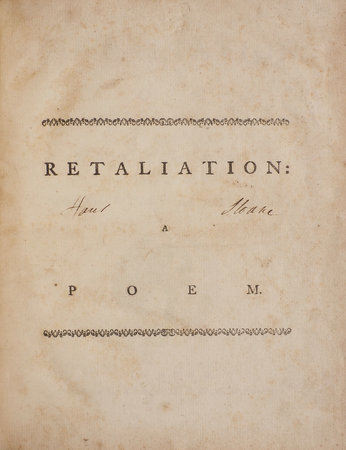 GOLDSMITH, [Oliver]. ~ Retaliation: a Poem. By Doctor Goldsmith. Including Epitaphs on the most distinguished Wits of the Metropolis. London: Printed for G. Kearsly. 1774.

First edition, title without ‘Printed as the Act Directs,’ all textual errata present (some have contemporary ink corrections).
The ‘Explanatory Notes’ not present here, were added in later states of the text (and were also given free to any first edition purchaser who asked for them). The ownership inscription of Hans Sloane (M.P., not the better known Hans Sloane who died in 1753) is perhaps significant with regard to this early state of the text. Tinker provides a useful note on the editions, quoting Frederick Locker-Lampson, who discovered contemporary advertisements demonstrating that the earliest copies of the first edition, like this one, were issued without the ‘Explanatory Notes.’ Williams’s Seven XVIIIth Century Bibliographies (p.162) notes the list of ‘Errors’ in later states of the pamphlet and the publisher’s statement that ‘a few copies only’ had them. Williams lists the five errors and remarks that he has seen one copy ‘which has all these misprints except the first.’ The present copy has them all. ESTC T146795 also describes this earliest state without the notes, though without listing all the errata. Corrections of the five errors (all but ‘when’ for ‘where’ on p. 10). Jackson, p. 33; Rothschild R 1038; Tinker, 1133.