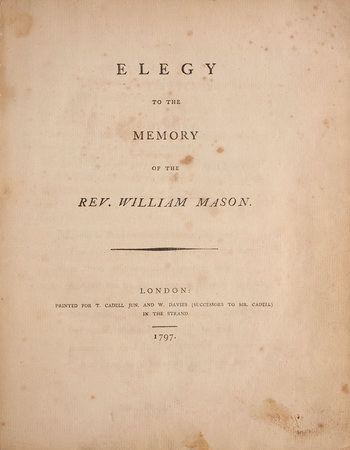 < >
‘for many years of his life, England's greatest living poet’ (Coleridge)

Sole edition of Gisborne’s elegy to fellow poet Mason; who, via the Yorkshire Association had been active in the campaign against slavery, which is alluded to here in 2 stanzas. Though now little known, Mason was very highly regarded by his peers. Coleridge called him ‘the most considerable Yorkshire poet since Marvell’ adding that ‘he was, for many years of his life, England's greatest living poet.’ Jackson, p. 217; ESTC: BL, Cambridge, Bodley, Senate House, St Andrews, Boston Athenaeum and Texas.