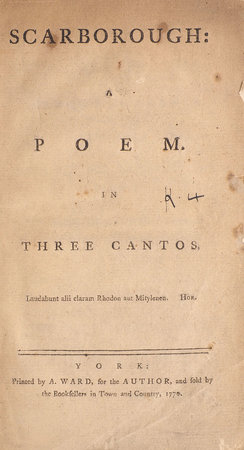 [FOSTER, Mark]. ~ Scarborough: a Poem. In three Cantos. York: Printed by A. Ward, for the Author, and sold by the Booksellers in Town and Country. 1770.

First edition. ‘With the 1770's came a succession of long and striking spa-poems... Foster's Scarborough (1770), a very ambitious work in three cantos... Devoting the first two cantos mainly to description and history and the third to local nautical heroes... Three interpolated stories of as many love-affairs expose the Grissil-like quality of the eighteenth-century heroine at its worst... There are exciting genre sketches like that of the ship-wreck, packed with agony; but most readable of all is the account of the 'oozy beach' with its 'visitants'...’ (Aubin p. 175).

Further editions followed in 1771 and 1777 (both York) with another in 1802. Not in Jackson; ESTC: BL, Leeds, Trinity College (Dublin), York Minster, Columbia, Huntington.