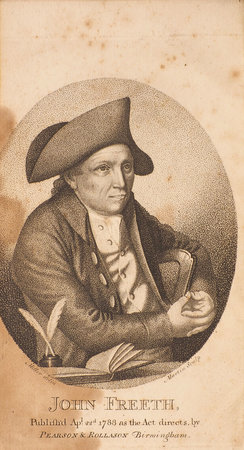 FREETH, John. ~ The Political Songster or, a Touch on the Times, on various Subjects, and adapted to common Tunes, the sixth Edition, with Additions. Birmingham: Printed by Thomas Pearson, for the author, and sold by all the booksellers. 1790.

The author was an innkeeper and ballad writer at Birmingham, where he was landlord of the Leicester Arms. Initially sung to his patrons the verses attracted sufficient attention, with their radical and political views, to warrant publication. The first of Freeth’s Political Songsters appeared in 1766 (40 pages only) and it was frequently re-issued with new and updated material. It includes numerous songs on the war against the American colonies, among them: ‘Bunker’s Hill; or the Old Soldier’s Lamentation’, ‘Burgoyne’s Defeat on the Plains of Saratoga’ and ‘Prescot’s Breeches: or the Old Soldier’s Voyage to America’.

‘On the Petitions for the Abolition of the Slave Trade’ appears in the 1790 editions for the first time, as does ‘Botany Bay’, a 10 stanza song (not by Freeth) on Australia, which had first appeared in The New London Magazine in, January 1787.

‘Away with these whimsical bubbles of air,
With only excite a momentary stare,
Attention to plans of utility pay,
Weigh anchor, and steer off for Botany Bay.
Let no one think much of trifling expense,
Who knows what may happen a hundred years hence!
The loss of America what can repay?
New colonies seek for at Botany Bay....’

There are also three interesting poems on the subject of boxing, appearing for the first time in the 1790 edition: ‘Stage Boxing’, ‘Mendoza’ and ‘The Pugilists; or, Banbury Thumps’.

‘It was Freeth's custom to write songs — setting his words to popular tunes — about remarkable events in local and national news, and to sing them nightly to the company assembled at his coffee house. The habit was profitable: it crowded the place with patrons, attracted eminent visitors, and, since Freeth wrote as a determined radical and nonconformist, created a political meeting-place... Freeth usually sang about feats of war, national emergencies, and affairs of state, such as the victories of Earl Howe and Lord Nelson, and the activities of Charles James Fox, Lord North, and William Pitt... Although unsophisticated, many of his patriotic songs have a stirring lilt; on politics he wrote with indignation, rough good humour, and an effective turn of phrase that earned him the reputation of being one of the best political ballad writers in the kingdom’ (Oxford DNB).

There are several issues of the ‘sixth edition’ of 1790 (ESTC lists no less than 6) with slight variations of pagination. This one is apparently a reissue with two extra leaves paginated 37*-40* and with ‘Finis’ on p.192, after which an extra gathering (S) has been added, containing ‘On Lord Sherard’s comming of age’, ‘Old St. Michael’s day, 1788’, ‘On, the Earl of Harborough’s birth day’ and ‘For the Earl of Harborough’s birth day’. Jackson, p. 160; Johnson, 346; not in Sabin.