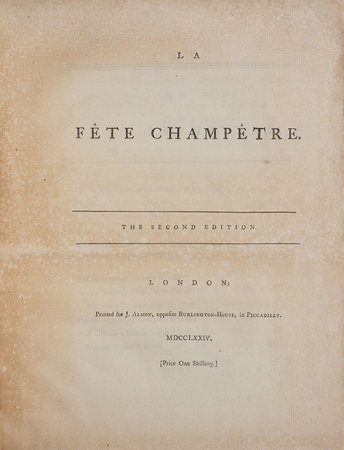 Second edition (of three appearing in 1774). ESTC: ‘A satire on the party given at the Oaks by Edward Smith-Stanley, later Earl of Derby, in honour of his approaching marriage’ (citing Hazen, Horace Walpole’s Library, 3222:13). Though Smith-Stanley entered Parliament in 1774, his priorities were more on the racecourse than in the Commons. His bucolic feast apparently clashed with an important sitting of the Commons: ‘It was remarkable most of the party were absent from the H. of C. the day before this celebrated Fête; even the M———r did not appear the day itself, though the most important bill was in agitation which has passed this century, and on which the fate of many thousands people depended’ (p. 11 n.). The Quebec Act was passed on that day (22 June).

‘On 23 June 1774 [Smith-Stanley] married... Lady Elizabeth Hamilton (1753–1797)... The marriage was marked by a glittering social assembly hosted by Burgoyne at The Oaks, Epsom, Surrey... Burgoyne's play The Maid of the Oaks was written for the occasion. In 1779, having borne three children, the countess left Derby for the questionable charms of John Frederick Sackville, third duke of Dorset, the most notorious rake of the day (Oxford DNB). Not in Jackson; all three editions are quite scarce. Of this one ESTC lists 11 copies.